We have our own unique technology, characteristic products and services with independent intellectual property rights. We can tailor a safe, environmentally friendly and efficient wellbore working fluid system that meets the needs of different customers according to various operating technical requirements. Meanwhile, we can provide on-site service personnel with international professional and technical levels. We can provide domestic and foreign customers with high-quality drilling fluids, completion fluids and various chemical materials for oil production operations.

· What can unique drilling fluid system and additives do：

· Maintain the integrity of drilling cuttings 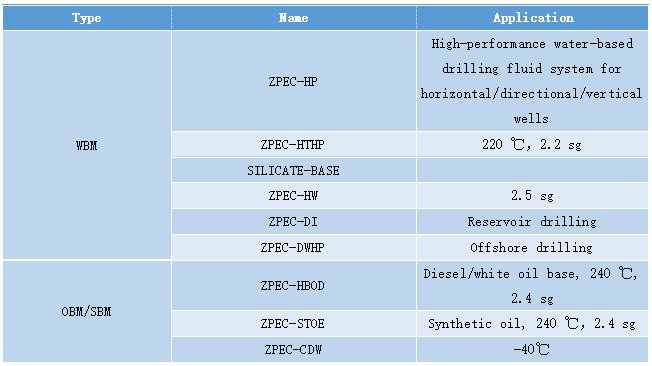 We have waste management experiences in the field of petroleum services in different countries. We have very effective and stable solid control and drilling waste management solutions. We provide successful solutions for different customers, from the beginning of drilling rig chips to the final disposal. In general, we usually call it an “Environmental solution”. The list of our drilling waste management software packages is as follows:
· Cutting dryer for WBM and CDFR
· Chemically enhanced automatic flocculation system（Flocculation System）
· Wastewater/liquid transfer
· Treatment and disposal of WBM cuttings
· Solids control and waste treatment technology(waste mud, rock debris(oil-based/water-based),sludge, sewage, etc.)

3、Research and development, production and sales of chemicals.
We have independently developed a variety of characteristic products such as unique plugging and anti-collapse agents, inhibitors, high temperature stabilizers, flow pattern regulators and acid-soluble oil and gas reservoir plugging agents. We have a high-quality R&D team and a high-level solution design team, a senior professional field service team who can answer and solve all incurable diseases underground-regardless of the difficulty of the challenge, the location or the environment.
3.1.Unique products
3.1.1Nano blocking and anti-collapse agent-ZM-MAGICSEAL H
ZM-MAGICSEAL H is a nano-scale deformable polymer high-efficiency plugging agent used in water-based drilling fluids, which can reduce the transmission of pore pressure by plugging pore throats and micro-cracks. ZM-MAGICSEAL H has a wide particle size distribution, allowing the product to block pore throats and seal micro-cracks in shale and pressure-deficient and layers, thereby preventing fluid intrusion. This plugging effect can prevent the pressure difference in the sensitive shale from increasing, while minimizing the risk of the pressure difference sticking event, and at the same time has a good protective effect on tight sandstone and fractured oil and gas reservoirs.
The temperature stability of ZM-MAGICSEAL-H exceeds 302°F (150˚C).

Features
· It can disperse into nano-sized particles by being added to water-based drilling fluids with shearing；
· It can significantly reduce high temperature and high pressure water loss: as pressure increases, high temperature and high pressure water loss decreases；
· It can form an inner mud cake with ultra-low permeability, which effectively reduces the risk of sticking with differential pressure；
· It can form an internal mud cake with ultra-low permeability, which has a good protective effect on tight sandstone and fractured oil and gas reservoirs。
Product application
CASE 1
The Tanuma formation in a certain block of Iraq is an interbedded marl and shale, with pure shale in the interbedded layers and fractured zones. According to the design of the horizontal well borehole trajectory, the inclination of crossing the Tanuma formation is about 50-70°. Due to the release of formation stress and the intrusion of liquid phase, the stability of the formation has been destroyed. All the previous highly-deviated directional wells and horizontal wells suffered serious wall collapse and instability problems and failed because of stuck. After the analysis of the stratum lithology characteristics and wellbore trajectory design, we decided to use a high-performance drilling fluid system and added ZM-MAGICSEAL H to strengthen the mud plugging ability, improve the stability of the wellbore, and successfully complete the drilling of the multiple highly deviated wells and horizontal wells. There was no instability underground. The borehole expansion rate of adjacent wells in this section reaches more than 80%, however, after using ZM-MAGICSEAL H, the caliper expansion rates of the two newly drilled horizontal wells were both within 3%.

CASE 2
In the past drilling process of a horizontal well in a certain block of Jilin Oilfield of Sinopec Northeast Bureau, due to the instability of the shale and siltstone lining of the Yingcheng Formation, mud density much higher than the pore pressure was used to drill in to maintain the stability of the borehole. The higher mud density has caused frequent lost circulation in fractured formations. The instability of the borehole wall and lost circulation problems have bothered the development of horizontal wells in this block.
By using the nano-blocking and anti-collapse agent ZM-MAGICSEAL H, the pressure-bearing capacity of the borehole wall was improved and a lower drilling fluid density could be used for drilling while maintaining the stability of the borehole wall, thereby solved two conflicting problems. Two horizontal wells were completed in this block and the drilling fluid density of 1.15 sg and 1.21 sg were used for the third interval drilling, which are far lower than the lowest 1.35 sg drilling fluid density used in adjacent wells for decades. During the drilling process of the deflection section and horizontal section of the Yingcheng Formation, the borehole wall was stable, the cuttings integrity was high, no mud loss occurred and the drilling was completed smoothly. The well wall strengthening technology can also protect the reservoir well. The production test results showed that the gas and oil production of the two wells is much higher than that of the adjacent wells, which was highly praised by customers.

3.1.2Nano blocking and anti-collapse agent-ZM-MAGICSEAL Y
ZM-MAGICSEAL Y is a unique composite anti-collapse plugging material, specially used as an oil-based mud system, designed to reduce a variety of downhole complexities, including wellbore stability, differential pressure sticking and leakage.
ZM-MAGICSEAL Y is a new type of bridge and plugging material that integrates a variety of advanced technologies to provide a multi-pronged approach to immediately solve the wellbore stability, differential pressure stuck and lost circulation problems.
ZM-MAGICSEAL Y has a wide particle size distribution, allowing the product to block pore throats and seal micro-cracks in shale and pressure-deficient sand layers, thereby preventing fluid intrusion. This plugging effect can prevent the pressure difference in the sensitive shale from increasing, while minimizing the risk of the pressure difference sticking event, and at the same time has a good protective effect on tight sandstone and fractured oil and gas reservoirs.
Product application
CASE 1
Boyeping 5 is a shale oil risk horizontal exploratory well deployed in the Hekou area of Shengli Oilfield. It has a four-interval design and a designed well depth of 5495.37 m. It was drilled with oil-based mud and the drilling fluid density was 1.85 sg. On January 24, 2021, a leakage occurred when it was drilled to 5140 m. The leaked section was 5101-5140 m and the leak rate was 0.75 m3/h. After adding the drilling fluid plugging agent and ultrafine calcium carbonate, we observed that there was no more leakage. On January 25, the drilling continued to 5308 m and another loss occurred. Prepared 30 cubic meters of plugging slurry containing superfine calcium carbonate, plugging agent while drilling and walnut shells for circulating plugging. Loss occurred when drilled to 5322 m, with a loss if 3.0 square meters. On January 26, when the drilling reached 5379.59 m, the drilling was completed ahead of schedule. Party A plans to conduct an electrical test after the leakage is successfully plugged. Prepared 30 cubic meters (addtion of 3 tons of superfine calcium carbonate, 1 ton of plugging agent while drilling, 1 ton of walnut shell, 1 ton of rubber power, 0.4 ton of wetting agent) plugging slurry to do circulation plugging and got ready to take out the directional instrument. On January 28, when went down to the bottom, lost circulation occurred, with a leak rate of 8.0 m3/h, and a cumulative oss of 103.8 cubic meters. Uplift to 3640 m technical casing, prepared 60 cubic meters of plugging slurry, formula:well slurry+6 tons of high efficiency oil-based plugging agent ZM-MAGICSEAL Y+3 tons of pressure-bearing plugging agent+walnut shell. Went down to 5050 m and circulated the mud, no leakage occurred. Continued to the end and started the pump gradually, the parameter was 5-15 strokes/minute, the pump pressure was 2-5 MPa and the liquid level was stable. The plugging was successful.
There are limited available plugging materials and usually the particle size is large, so that is cannot enter the micro-cracked formation to achieve a plugging effect. ZM-MAGICSEAL Y has a wide particle size distributin, especially the micro-nano particles, which can enter the formation and form an effective plugging film. In addition to having a plugging effect, it can also prevent mud fluid column pressure from transimitting to the formation to reduce the risk of re-leakage caused by the activation pressure.
This construction is the first time that ZM-MAGICSEAL Y has been used in field oil-based mud. It has shown a good plugging effect in dealing with the formation of micro-cracks and leakage. The successful plugging has also broadened the application range of oil-based plugging agent ZM-MAGICSEAL Y. in addition to solving the problem of instability of the well wall, it also provides more options for oil-based mud plugging.
3.1.3Smart response inhibitor-ZM-CLAYSTOP(AI)
Smart response inhibitor is a polymer with pH responsiveness. When the molecule penetrates into mudstone, under the action of ionic bonds, it can achieve adhesion to mudstone, and use the weak acidity of the underground soil layer to convert macromolecules into hydrophobic substances, thereby preventing the subsequent penetration of drilling fluid and achieving mudstone inhibition of swelling.

Features
· It has good shale inhibition capacity and can effectively control clay dispersion, prevent mud pack, stabilize flow pattern, suitable for various soft mudstone formations, salt-gypsum formations, strong water-sensitive formations and other complex formations.
· It has good pH responsiveness, the response point is between 5-8. Under neutral or weak acid conditions, it can be transformed into a hydrophobic structure to inhibit further penetration of water.；
· It has good mudstone adsorption and can prolong the collapse time after water absorption；
· Good temperature stability, stable at 120 ℃；
· Protect oil and gas reservoirs；
· Good compatibility with treatment agent.
3.1.4Plugging agent for lost circulation in oil and gas formation-ZM-BRIDGE FLAKE
ZM-BRIDGE FLAKE is a crystalline sheet plugging agent, suitable for lost circulation plugging in production zone drilling of water-based and oil-based drilling fluids. It can be acid-soluble and has an acid-soluble solubility of more than 90%. This material has shown good results in the horizontal wells application of Sinopec Northeast Bureau. The product has three categories of 10 mesh, 20 mesh and 30 mesh for optimal ratio. 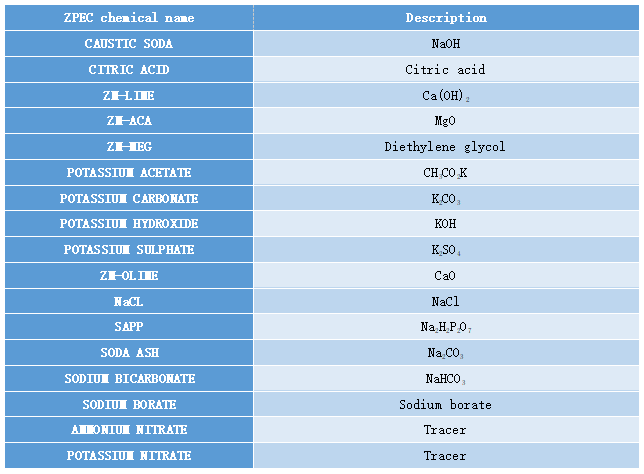 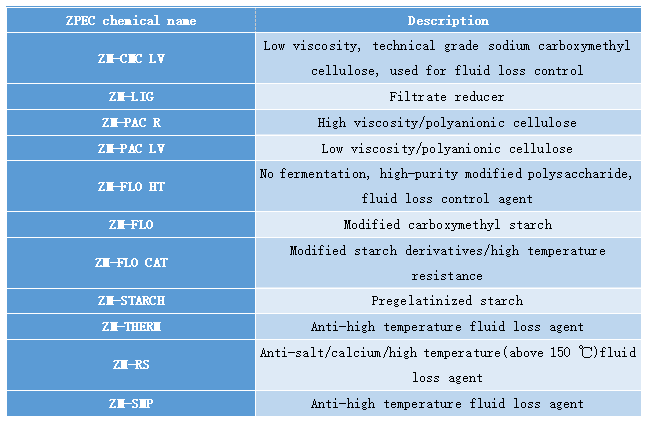 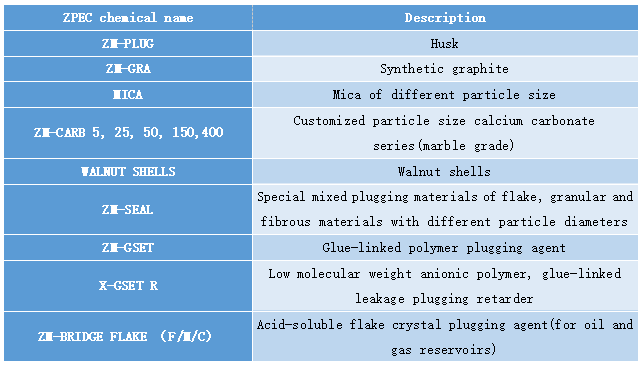 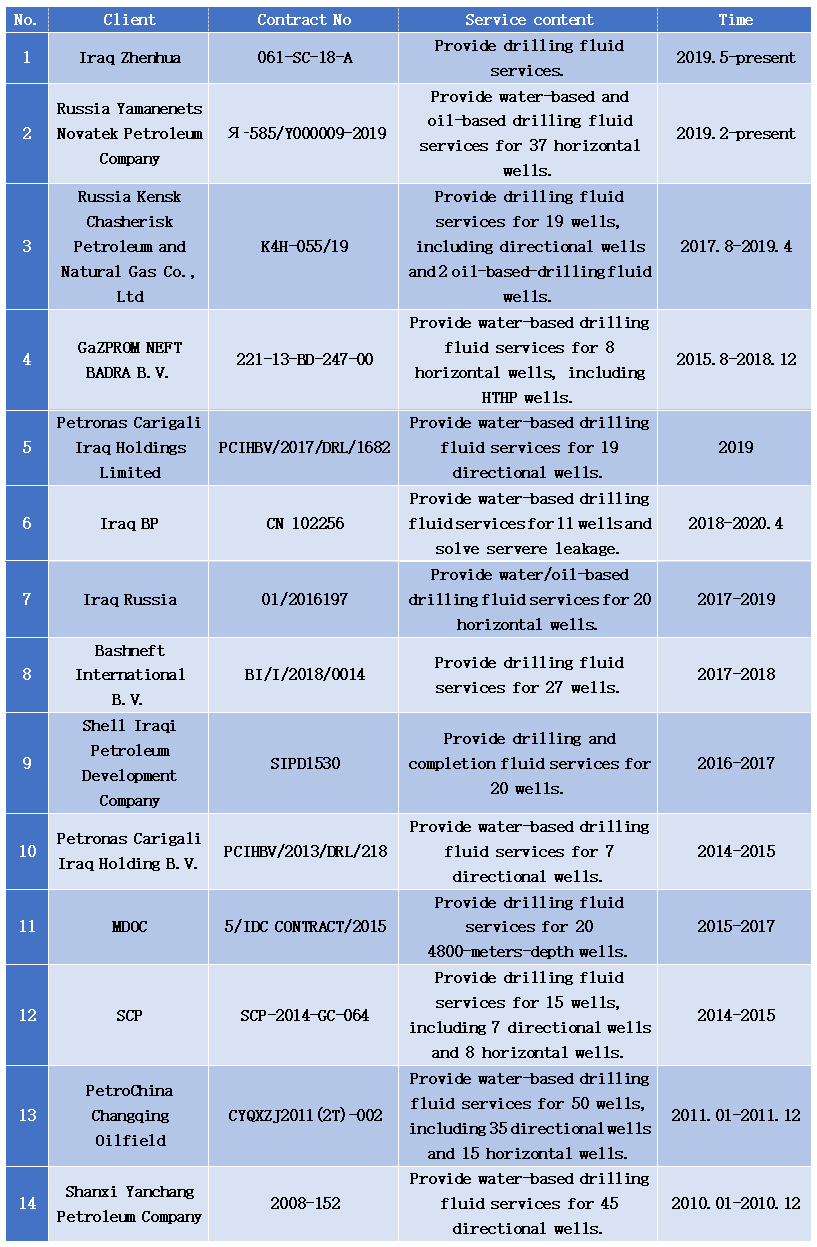