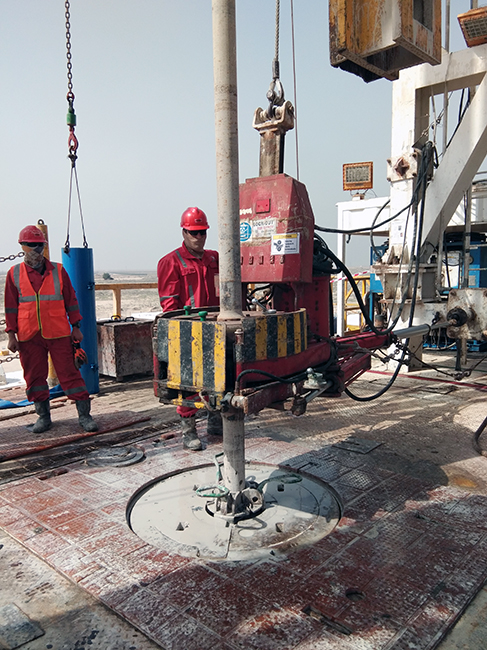 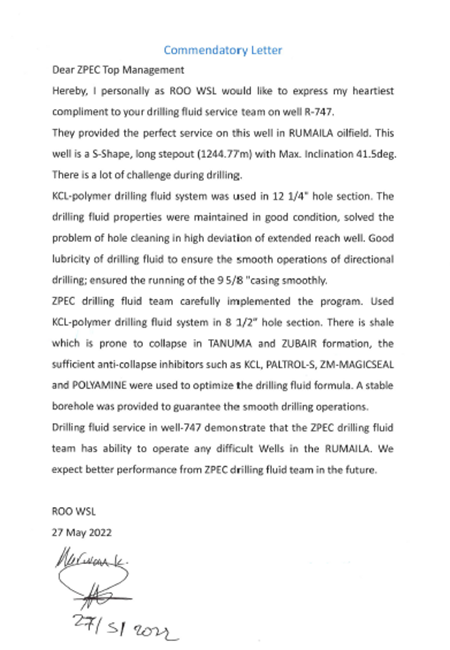 At 4:00 a.m. on May 31st, R-747 Well of Rumaila Oilfield of Zhongman Iraq BP Project was successfully completed.  It is the most difficult well among the thousands of wells that have been constructed in the Rumaila Oil Area of Iraq.  The horizontal displacement of 1,227 meters broke the oilfield record and the Zhongman overseas team once again received high praise from Party A for its good construction performance and for establishing a good brand image. The successful drilling of this well shows the strength of the Zhongman Drilling Team to overcome difficulties, fight big battles, and fight hard battles, which has been highly recognized and trusted by Party A, providing a strong guarantee for the company to win additional contracts.

Drilling: Completed 12 days ahead of schedule to set a new record for drilling difficult wells

R-747 Well is in the northern boundary of Rumaila Oil Field.  Adjacent well data is scarce, the geological conditions are complex, the horizontal displacement is large, and it is the most difficult well in the oil area.

After receiving the notice of the allocation of well positions from Party A, the Project Technical Team took the lead in organizing the participating teams in Zhongman to conduct construction demonstration and technical submission for many items. During the construction, the Zhongman Team 26 paid close attention to equipment and team management, strictly grasped the time node, and strictly organized the third party to cooperate with the construction. Thus, the seamless connection of various process conversions were realized and the solid and orderly advancement of each process were ensured.

The Project and the Well Team always put safety production first and, while strictly implementing the provisions of Party A, they achieved safe, fast, and efficient production, and handed over a satisfactory answer sheet to the Group Company.

In recent years, nearly half of the large displacement key wells above 800 meters in the Rumaila Oil Field were drilled by Zhongman Team 26.  Following the previous two important indicators of the fastest inter-wells moving record (7.48 days in the oil area and the fastest completion record of a single well in 25.75 days), the R-747 Well set a record for the longest horizontal displacement of 1,227 meters.  Additionally, the R-747 Well design period was 60.79 days and the actual time was 48.94 days. ZPEC Drilling Team 26 once again achieved a major breakthrough and became a veritable benchmark team in the Rumaila Oil Area.

R-747 Well was the most difficult development well in the thousands of wells drilled in Rumaila Oilfield, of which the well bottom displacement of more than a thousand meters has never been successfully drilled. In order to ensure the smooth construction of this well, ZPEC’s Drilling Fluid Team carefully summarized and analyzed the adjacent well data in the key well section using Zhongman independent intellectual property rights of its high-performance water-based drilling fluid system. The strict implementation of program design during construction with preferential system formulas according to the downhole situation allowed performance adjustments to be made in a timely manner.

During the directional construction link, wellbore cleaning has always been the key to determining whether or not the well can be drilled smoothly.  With the Zhongman Drilling Fluid Team continuously adjusting the drilling fluid parameters and cooperating closely with the Engineering Team, good results were achieved, which greatly saved the drilling cycle.

In the face of the construction difficulties such as multiple sets of shale layers and serious collapse of the well wall with the same naked eye, they used the self-developed patented product blocking agent and inhibitor to effectively ensure the stability of the well wall with long naked eye and large horizontal displacement.  The blockage, inhibition, and lubricity of the Zhongman high-performance water-based drilling fluid system were well demonstrated in the construction.

After the successful completion of the R-747 Well, Party A sent a letter of commendation to the ZPEC Drilling Fluid Team, praising them for using the self-optimized drilling fluid formula and materials to ensure the smooth construction of the drilling operation, and wishing for better performance in the future.

Cementing: The 100% sealing standard once again won the praise of Party A

This large displacement well was also a huge challenge for cementing operations causing Zhongman Cementing Team to face the multiple difficulties.  Many times technical personnel were organized to analyze and discuss the situations where they developed a series of detailed program measures.  In the process of on-site construction operations, strict one-by-one procedures were implemented.

In order to ensure the safe and accurate running of casing, the Cementing Team repeatedly carried out casing running and centralization simulation through professional software, continuously optimized the tonnage and speed of casing running, reduced friction resistance, and ensured that the centricity was greater than 67%.  This provided a good guarantee for the smooth implementation of cementing.

In the cement slurry design phase, in order to ensure the filling effect of the cement slurry in the large displacement well section, they specially designed the double condensation anti-channeling cement slurry system to achieve the purpose of effectively stabilizing the formation.

During the cementing construction, the Cementing Team strictly controlled every link of the site.  While striving to achieve excellence, they cooperated tacitly with the on-site Engineering Team and, at one time, made the cementing quality of the three openings of R747 Well meet the 100% sealing standard required by Party A.  Party A also sent a letter to congratulate them.